Kerala is a really beautiful place in terms of natural beauty. You get to see pristine beaches, misty mountains, valleys, forests and backwaters – everything in that tiny strip of land along the south Indian coastline! I’m sure you’d have heard of Alappuzha, Fort Kochi and Munnar. But this time, I’m going to take you to two lesser known but beautiful places – Ranipuram and Bekal Fort in the northern district of Kasargod in Kerala.

In the last semester of college, one thing that everyone wants to do is go for trips. It suddenly dawns on you that there is not a lot of time left and you might never see your friends again! The best way to create memories is to travel together. And that’s where the the location of our college helped – there were places to go to in every direction! Even the lazybones felt compelled to venture out atleast once after repeated warnings – ‘Dude, this is the last sem. Life will never be the same’. After a lot of thought (and little planning) we decided to go to Ranipuram. A simple one-day trip with a trek. We thought we’d include Bekal Fort too as it was on the way back.

The Ranipuram trek is really beautiful as you walk across misty green grasslands while climbing up to the top. It is about 45km by road from Kanhangad railway station and you can easily get buses which go there.

But we were starting our journey from Surathkal and that’s where I’ll start as well. The expenses mentioned are from 2011, so they might have increased now.

05:30 : The first leg of the journey was from Surathkal to Mangalore (a local bus early in the morning – Rs. 12). We were to catch the 06:50 Mangalore-Chennai train. With the empty roads and the insane driving, there was no question of being late for the train.

06:50 : We boarded the Chennai Egmore express for the second leg of our journey. General tickets from Mangalore to Kanhangad cost Rs.27. The best thing about trains in this part of the country is that they run on-time (sometimes even before-time). 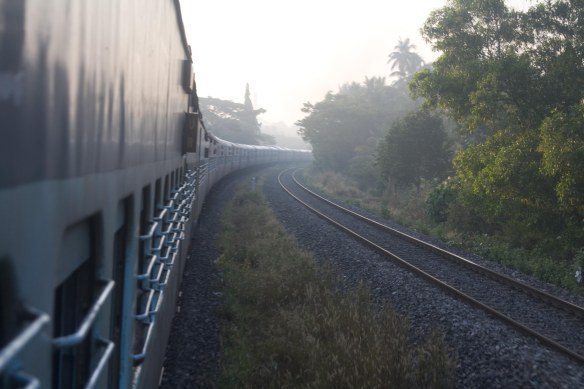 As the train started from Mangalore, we did not have trouble getting seats. And so, we were off. 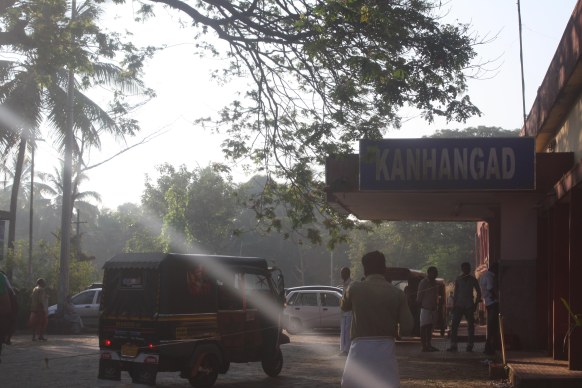 The next leg of the journey was uncertain as we weren’t sure of the exact name of the place to go to. A couple of phone calls later (we did not have good internet on our un-smart phones at the time), we were on our way to the bus stand to get a bus to Panatthady. We broke fast with idli and kadala curry (chana) at the railway station. 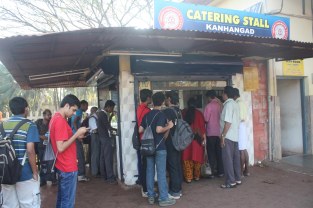 That was too less to satisfy our hunger, so we went out and had parota and egg curry at a nearby hotel. 😛

09:00 : The bus stand was at a walkable distance from the railway station (around 10 mins). The private bus stand was next to the KSRTC one. The private bus system in Kanhangad seemed quite good. Thanks to my grandma’s endeavours during my childhood summer vacations, I knew how to read my mother-tongue. So, without much trouble we located a Paanathur bus which would take us to Panatthady (Rs. 23). Trust me; it’s best to take a Malayalee with you as all the bus boards are write in Malayalam. BTW, this was leg 3 of the trip.

10:25 : We reach Panatthady. The last leg of our journey was a jeep ride to Ranipuram. The jeep costs Rs.250 for one way.

But as there is no other way to get back from the top, you need to book the same jeep guy for return as well. As the main road was blocked for construction, we took a kachcha road. The jeep had a tough time “trekking” over roots and boulders to the top.

11:10 : Ranipuram at last. Well atleast, the starting point of our trek there. There is a small guest house kinda place from where the trek starts. It wasn’t the best time of the year to visit Ranipuram as summer was here and everything had started drying up. We were warned earlier that the place would be teeming with leeches. But even they couldn’t stand the dry heat. Though the green was a bit on the yellow side, the trek was good. Most part of it was under the shade of the forest.

The trees opened up to round hill tops with grasslands.

There were a number of such bald hills all around, and they were amusing in their own way. When you look at these hills from afar, they all seem to be connected. But what you can’t see are the steep valleys between every two hills – you get to know this only when you get to the top of a hill. So if you get on the wrong hill, you have to come down and climb back up all over again. 😛

12:00 : We reached the top (of the hill we wanted to) after about 45 mins of trekking. There were some huge boulders at the top (eerily reminded one of 127 hours). 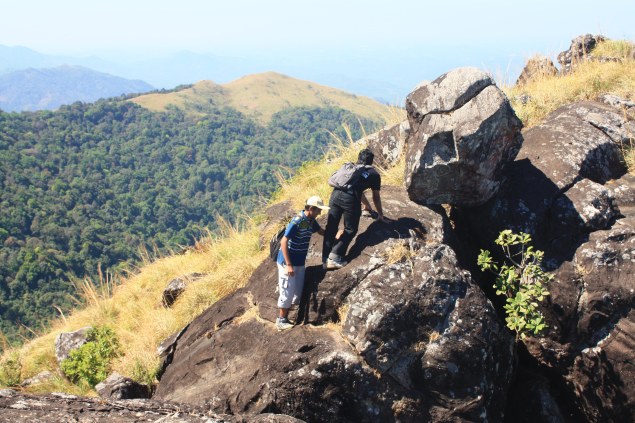 The view from up top was amazing with a steady breeze blowing-completing the soothing getaway experience.

A photo session ensued. We then snacked on the biscuits and chikki that we’d brought along – get some snacks as you won’t get anything to eat at the top – make sure you don’t get plastic or litter the place.

Downhill was a bit tough as the sun had dried up the trail and the soil was quite loose. Sliding and scrambling, we headed back down to our starting point.

14:40 : Boarded a bus back to Kanhangad. This was by far one of the most strenuous bus journeys I’ve ever had. There was hardly any place to stand and the winding ghat roads did not help the cause. One such journey a day and you can save on your monthly gym membership.

15:50 : Totally exhausted, we got off at Kanhangad. Our initial plan was to go to Bekal Fort as well (as it came on our way back). People were already starting to have second thoughts of going to Bekal when – Spoiler alert! A Karnataka state bus to Mangalore pulled into the stand. What more would a tired mind (and legs) want than to sit back, relax and go home?

It took quite a bit of persuasion from me (I’m always in for more adventure ;)) to get everyone back into the mood. If we missed Bekal now (when we were so close to it), we’d never go there (atleast when we’re in college).

16:30 : Bekal Fort. The fort is just about 300m from the main highway. Bekal is the largest fort in Kerala and was constructed in 1650. It is about 70 km south of Mangalore. There was an entry fee of Rs. 5. You would have seen the Tu Hi Re/Uyire song from the movie “Bombay” – that was shot here. The fort stands tall along the seashore with a wonderful view.  There is an elevated platform right at the centre of the fort with a steep ramp. 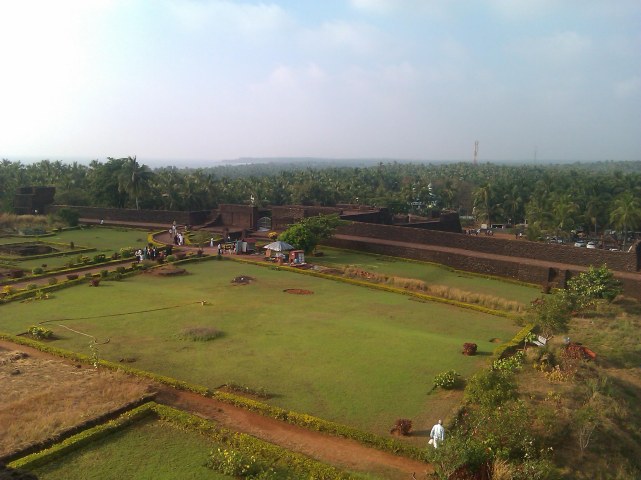 Tired of walking all day, we settled in one of the niches along the outer wall of the fort and feasted on peanut-butter and jam sandwiches (peanut-butter courtesy NKD).

We decided to head back in the 6:00pm train back to Mangalore from Kasaragod.

17:25 : Where are the buses when you need them? It was around 30 km to Kasaragod and there wasn’t a single bus on the road. Finally we got a bus at 17:25, all hopes of catching the train lost.

18:25 : We finally reached Kasaragod. Pro Tip : Though Bekal is usually associated with Kasaragod, it’s not the best way to go there. it’s better to go to Kanhangad from Bekal – it takes just about 20 mins. Just make sure your train has a stop there. We got off at the highway stop outside Kasaragod and crossed over to the new bus stand.

18:30 :  We took a Kerala KSRTC to Mangalore. I’d always wanted to sit in one of these and go around in Mangalore (the Mallu in me was yearning for it :P). It costed Rs. 37 from Kasaragod to Mangalore. Almost everyone dozed off. The moon was in its full glory, and in the background some small chicks cheeped on in a box at the back of the bus.

20:00 : Back in Mangalore. Parfaits from Pabbas concluded a rather “par”fect trip.

21:00 : Back in college. Relieved the aching muscles with a nice hot bath and crashed into bed.

And thus ended our first trip in our final semester at NITK.

If you liked this post, please do leave a comment below and share with your friends. This blog is fueled by your support and feedback. Do keep visiting!