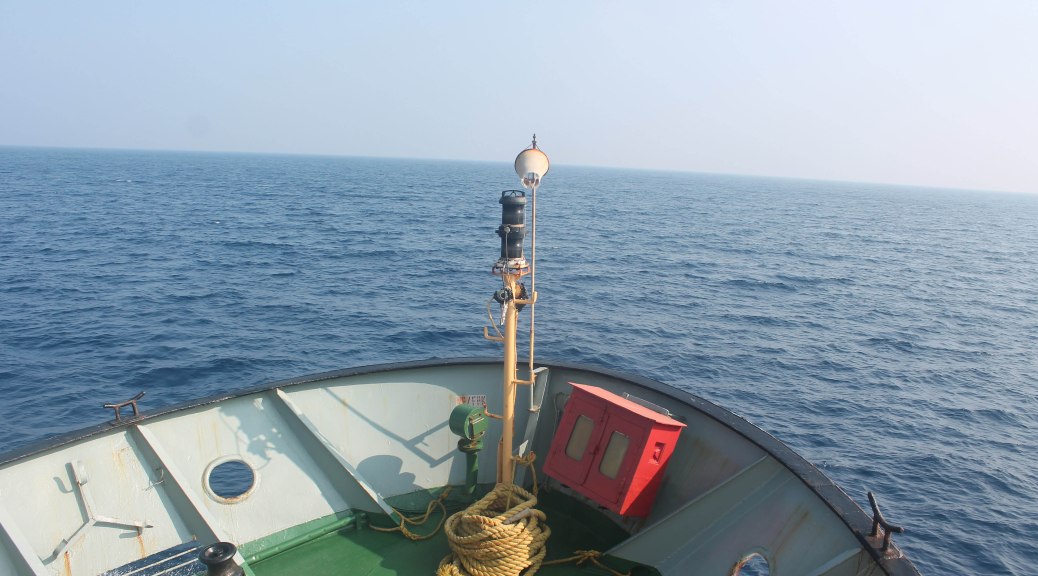 Last time we met, we had completed part one of our journey – Port Blair and Jolly Buoy islands. We continue our journey here to explore our next island in the Andamans – Havelock. I couldn’t club any other island with this one as this island tells an interesting tale of its own.

We left early morning to catch our ferry to Havelock Island – one of the most famous islands here. 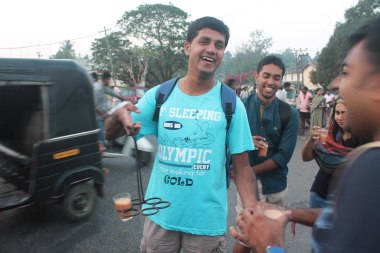 We had tea near the port where Papa (nickname) brought tea for us in the classic chaiwallah-boy tea-tray.

We entered the port to see huge boats waiting to sail out to different islands. The inside of the boat was quite stuffy with round glass windows (all locked) and life jackets placed in the racks above. The inside was air-conditioned but it wasn’t too comfortable as the boat was jam packed. We explored the boat and went outside to the deck. There were stairs leading up to an upper deck. The weather was pleasant and the sun not too harsh, so we climbed up. The view was amazing.

It was the first time I was travelling on such a huge boat and it was amazing how fast the thing was moving – cutting across the waves. The water was clear as ever and it turned a deeper shade of blue as we entered the deep sea. We soon left land behind and there was nothing but sea on all four sides. 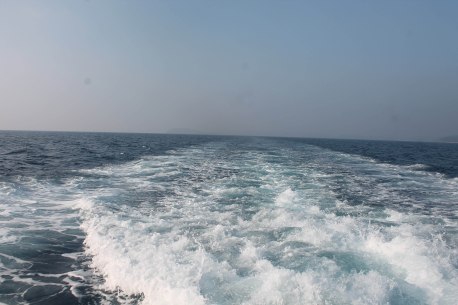 The feel of the moment is something that is difficult to be put into words. Absolute tranquility interrupted only by the sound of the engine of the boat and the waves hitting it. Complete solitude leaving aside the crew and people below. The sun peeked out with its warm rays while the salty wind blew across our faces.The occasional spray as the boat jumped in and out of the waves. Water everywhere – as far as the eye could see.

As we stood there in silence taking in the beauty of the ride, something cut across the water. Just then someone shouted – flying fish! True enough, there were scores of flying fish all around our boat. The little things would jump high in the air and follow the contour of the waves, making sure not to touch the water, and finally dive right back into the sea. It was a truly amazing sight – reminded me of the movie – Life of Pi. I tried hard to click a few pics but sadly, it didn’t work out – they were too quick. After a few attempts, I gave up on it and thought it would be better to enjoy the moment.

We thought we’d push our luck a bit more and ask the captain if we could get onto the front deck. Nam took the lead and soon enough we were all lounging on the front deck.

The captain’s room had a windshield with wipers on. On a nice and sunny day, there was no need to have the wipers running. Or was there? The thing is – Boats move in and out of the deep sea waves – like in and out of “phase” with them (pardon my ECEness). And the moment it goes “out of phase”, the front of the boat falls straight into a trough and water splashes all over (we got sprayed many times!) The wind blew hard and overall it was an amazing feeling!

We docked at the Havelock port, which was at a considerable height and we disembarked the boat from the upper deck itself. We took taxis to our hotel – Dolphin Resort. 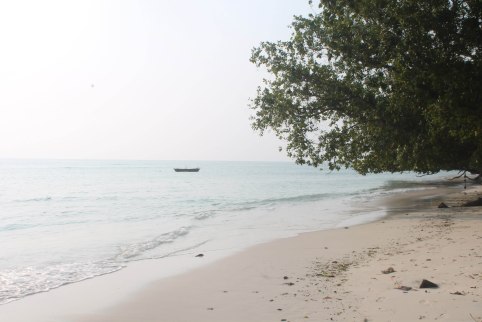 It was a beautiful place with cottages all along the Vijaynagar beach (numbered here as Beach #5). A cottage with full glass windows overlooking this beach – absolute bliss! There was a boat tethered a bit into the water – looked like a tourist attraction. Some people waded into the water and climbed on to the boat while some others went to book our slots for the most awaited part of the trip – scuba diving. We got a really good deal at Andaman Bubbles (one of the many scuba diving guys in Havelock). After completing the formalities (which included a statement that they won’t be responsible if we drowned :P), we returned to a shock at our resort. The sea was nowhere to be seen! The water had receded by a long distance and the boat that was floating in waist-deep water was grounded. My first thought was – tsunami! Bah – sometimes I just over-react! 😛

The beach was beautiful with a lot of trees and on many of them were hammocks. 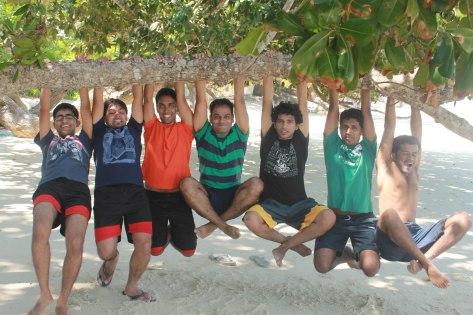 But then, we had a bunch of really young guys in our group – Papa, Mr. Apple and Guru (Guru was called so as he had a much disciplined disciple in Jetha). So we ended up climbing up the trees, doing somersaults on the beach and of course, clicking away. We then decided to have a swim in the sea. It was afternoon but the sun was forgiving. However, the only problem was that there was no water. The sea bed which had just come up was slushy with many holes, seaweed and giant black leeches.

Treacherous ground indeed. We walked and walked in the slush till we reached deeper water. Just being here was an amazing feeling – standing out in the sea after the walk through the treacherous beach and with various shades of blue water all around, knowing that this very spot would be flooded with several feet of water in a few hours. 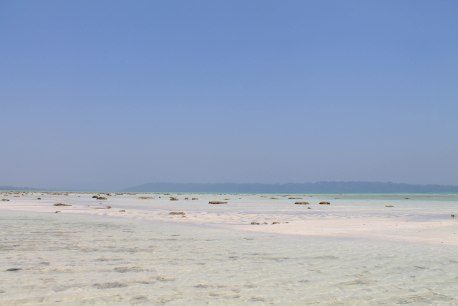 We returned and took taxis to the Radhanagar beach (Beach #7). This beach is widely considered as one of the most beautiful beaches in the world. We bought Frisbees on the way. It was indeed a marvelous beach! There were 3 yachts anchored in the water (this was in really deep water and the water didn’t recede that much in the afternoons) and the sun was beginning to set. This beach was more like the beaches we see in Kerala – with the waves rolling into the sand.

And waves mean only one thing – jump right into the water. I preferred to stay dry on this occasion – clicking pics as I explored the beach. The sunset was beautiful – we clicked a lot of the classic “eat-the-sun” and “hold-the-sun” pics (can’t waste sunsets, can we? :P). On our way back, we bumped into yet another group from our college – they had enrolled in the same place as us for scuba diving.

Next morning, we woke up with jitters – it was scuba day. We walked to Andaman Bubbles where our pick-up truck waited for us. Yes, a pick-up truck. We got loaded on it like cattle and held on for dear life as we were taken to the fitting area. We all changed into our black scuba costumes and got back on the truck. 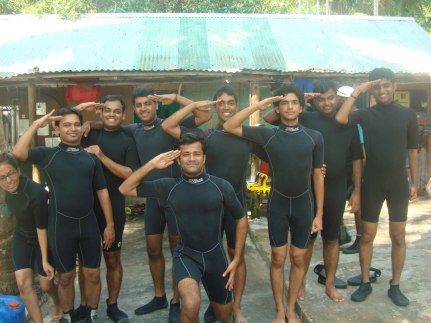 The anticipation was building with every second and it could be seen on everyone’s face. The dive had been arranged at a beach near the port where we landed. After a quick training exercise, where we were taught the basics of breathing underwater, we proceeded underwater. The equipment was heavy and the fins attached to the feet made it difficult to move the legs. Each of us got one diving companion each who would guide us and be with us at all times. The surprising part here was that you don’t need to know even an ounce of swimming. All you need to do is remain calm, not panic and keep breathing. That’s it! It was a beautiful experience. 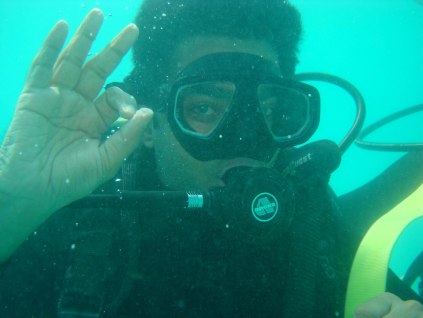 Colourful coral all around, fish swimming in and out of them, clear water everywhere and the sun rays shining right through to the bottom. It ended faster than I expected though – just about 20 mins.

It was almost noon by the time we came out. We rented scooters to explore the island. We first had lunch at Anju Coco – bumped into 2 more groups from our college (different ones). We decided to go snorkelling at the Elephant beach. We reached there at about 3.15pm and found out that the beach was closed – it only remained open till 3pm. Slightly disappointed (not much though – snorkelling couldn’t beat scuba), we decided to go to Radhanagar again.

After all, it wouldn’t hurt to visit the most beautiful beach in the Andamans one more time. This time I plunged into the water as well. It was a wonderful evening which ended with a long scooty ride in the dark and curvy roads of Havelock. Most people were quite tired after the exhilarating day. Few of us went out to Charcoal restaurant for dinner and we called it a day. We spent some time walking along the beach in our resort while the sea gently lapped at the sands.

Next morning, we decided to go to the Kaala Patthar Beach for the sunrise. It was a tall ask to wake up early after having slept late.

But again, 6 of us took out our scooters and rode to it. It was a beautiful ride – the roads were narrow but it was a scenic ride in the cool morning. We didn’t really spot any black rocks there, but arrived just in time for the sunrise. We lazily sat on the beach as the sun rose and soon, it was time for our boat.

We hastily packed up and rushed to the dock – we survived a petrol outage scare thanks to Guru’s resourcefulness. We rushed into our boats and soon set off toward our next island – Neil.