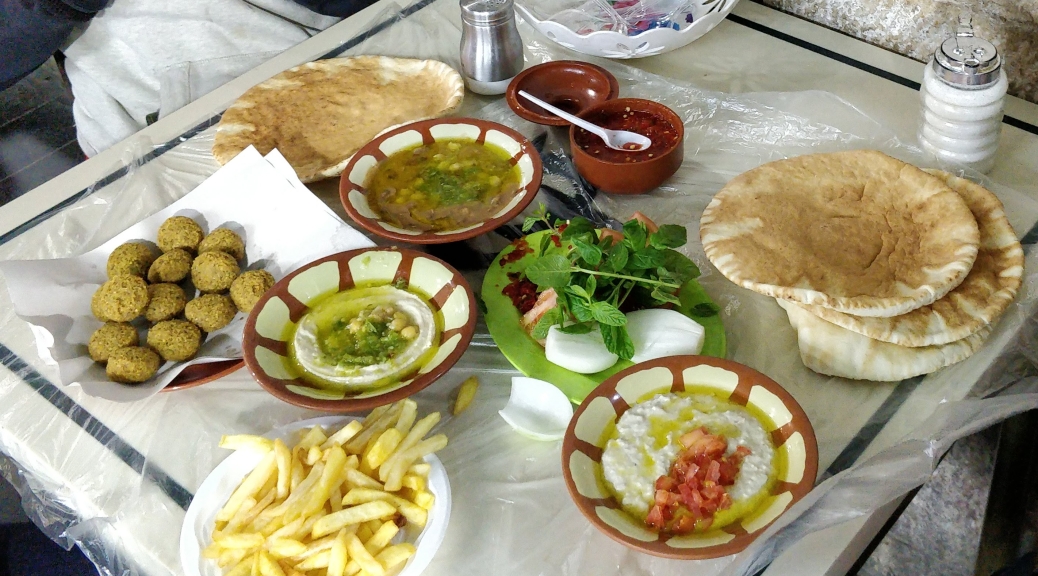 Amman is the capital city of Jordan. It is the largest city in the country and lies sprawled across hills and valleys. Our first reaction upon landing in Amman was that of awe – we felt like we were somewhere in Europe with lush green meadows and great roads. The stereotypical “Middle-east” image in our minds was shattered.

It lies on the ancient King’s Highway – the main trade route connecting Africa with Mesopotamia. Neolithic human settlements have been found in the areas around Amman dating back to 7000 BC. The city was named Philadelphia by the Greek when they took over the region around 250 BC.

We checked into our hotel and went straight to the Roman theatre. This was built by the Romans around 150 AD when they controlled the Levant. We did not expect to see Roman ruins of such quality in Jordan!

Next stop – Amman Citadel. The Citadel sits atop one of the seven hills which make up Amman. It was the capital of the Kingdom of Ammon in 1200 BC and was subsequently occupied by the Assyrians, Babylonians, Greek, Romans, Byzantines and Umayyads. Thanks to this legacy, the Citadel is considered to be one of the oldest continuously inhabited places in the world. Inside the Citadel you can visit a variety of sites including the Temple of Hercules, the Umayyad Palace, a Byzantine church and a museum holding some of the ancient archaeological finds. You can also get some really good views of the city from the top.

After this, we went onwards to Jerash – one of the best-preserved Greco-Roman cities in the world. You can read more about Jerash and the Historical Melting Pot that is Jordan here.

Later in the evening, we were back in Amman and out to explore the amazing food scene here. We had one destination in mind – Hashem’s Restaurant! This is one place you cannot miss – in fact, their website claims that “if you haven’t tasted Hashem, you haven’t been to Jordan”. This is one of those places that really lives up to the hype. Before I get into what we ate, let me try to recreate the experience. We sat down at a table (we had arrived early and didn’t have to wait for it) and waited for someone to hand us the menu. Instead, one of the waiters came over and covered our table with a plastic sheet. Within a few minutes, our table was covered with amazing looking dishes. We learnt that Hashem’s has a standard menu – Hummus, Falafels, Baba Ganoush, Ful Medames, French Fries and a lot of salad. We were handed some pita breads which we held and waited for plates. But none came. We looked at other tables and got the cue – the plastic wrap on the table was the plate! It was easily one of the best meals we’ve had on any trip.

Was it the best falafel we had? Yes, at the time of eating it. But we didn’t know that the best was yet to come!

Tummies full, we explored the markets in downtown Amman. We’d read about a sweet shop – Habibah which, apparently, had the best Kunafa (or Kanafeh) in town. We were introduced to this heavenly dessert in our Dubai trip. The one we had at Habibah took it to another level! Crunchy semolina topped with pistachio and sugary syrup. As you bite into it, you get the warm and gooey cheese filling. Absolutely amazing!

On the last day of our trip, we visited the Rainbow street which is lined with restaurants and pubs. It is also home to the famous Falafel Al-Quds – THIS is the best falafel we’ve ever had! Fresh out of the frier, the falafels are packed into a sesame bread with fresh tomatoes, pickles and tahini. We picked up one and walked along the street eating it. The moment we finished it, we wanted more. And back we ran to get another one. It is the kind of food that sits strong in memory and can give you cravings any time of the day.

One thing you would have noticed is that all the food mentioned so far was vegetarian – in fact, it is so good that you don’t really miss meat. However, when in the Middle east, don’t miss out on the shawarma. We headed to Reem Shawarma – a hole-in-the-wall place where you can grab some of the best shawarma you’ll have.

To sum it up, Amman is a foodie’s paradise. Make sure you set aside time specifically to explore the food scene – you won’t regret it one bit!

You can read all about our Jordan trip here:

A Visit to a World Wonder and the Red Planet

A Historical Melting Pot and a Sea Where You Cannot Drown