It was one of the weekends when Spilla was here for his project. We decided to rent out a car and go for a drive somewhere nearby. After a lot of research and debate, we decided to make for Hogenakkal Falls which was on the border of Karnataka and Tamil Nadu. We first tried Zoomcar but couldn’t get the car we wanted. Then we decided to explore other options if available and found Carzonrent who also offered self-drive cars. We did a quick check of how much the rates added up to with the distance and mileage and found that for longer drives, Carzonrent made much more sense as it was the cheaper option. We booked a Swift for our drive on Saturday.

Sadly (or luckily), a guy called on Friday evening and informed us that the Swift wouldn’t be available and they could offer us an Etios. Well, a free upgrade was always welcome. So we picked up the vehicle on Saturday morning from their office in Ulsoor. The self-drive part of Carzonrent is called Myles and that’s what was stamped on our car. So it was Nam, Arjun, Spilla and me. I took to the wheel at first as I knew the way out of the city.

It feels really good to drive on the roads of Bangalore when there is little traffic – especially when you can cross places like Sony World (Koramangala) and Silk Board in a jiffy (where traffic generally moves at 4kmph!). One necessary evil on the car was the speed limiter – if we crossed the 100kmph mark once, we would be fined 1000 bucks. If we did it more than 3 times, we would have to pay a penalty of 5000 bucks.

The good part was that we were cruising along while enjoying the landscape and the weather. The sad part was that we had to watch Tata Nanos and two wheelers zooming past us on the beautiful road. We stopped right after Hosur for breakfast where we had dosas and coffee. What a pleasant change – the red masala powder inside the dosas wasn’t the norm here. We took turns to drive and luckily everyone was good at the wheel. We drove on through Shoolagiri and Krishnagiri. The weather was perfect – not too hot thanks to the cloud cover and also no rain. We took the diversion just before Dharmapuri towards Hogenakkal. From here, the road narrowed down into a single lane road.

We soon reached Hogenakkal – a journey of almost four hours from Bangalore. With great difficulty, we found a spot to park the car and walked towards the falls. The place was crowded with families and student groups. There were shops offering fried fish from the river – freshly caught (or so they said).

We saw the Kaveri river flowing by under dense tree cover. It was a wonderful sight, or so I thought for a few seconds until my eyes went downstream. There were half naked people bathing and washing clothes in the river water. Others were sprawled on the bank while being massaged with oil. I turned to see a huge guy standing next to me with a bottle. He boomed – “Sir, oil massage?” I politely refused and we quickly moved ahead. We learnt that this was the Tamil Nadu side of the falls. We could see the falls from a hanging bridge. The river flowed down with great power over the cliffs and the spray rose even higher than the falls.

We spotted a small cage near the side of the falls. There were almost a hundred people jammed in there getting buffeted by the water. It was a crazy and horrifying sight – difficult to imagine how those people were actually enjoying that experience.

We found out that we could get a coracle to the Karnataka side of the falls which was considered the more beautiful side. We walked by the side of the falls to reach the point where the coracles were “docked”.

It felt great once we left the shore and all the crowd behind. This is what we came here for in the first place – some peace and quiet! And the scenery improved as well – the river widened out and there was greenery all around. I took a deep breath – no smoke or pollution for a change! 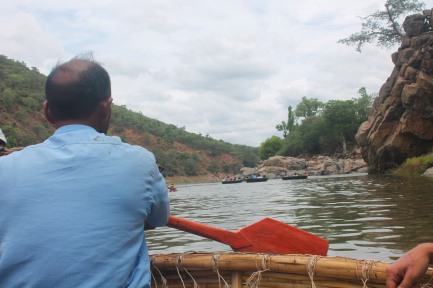 We skipped the fried fish that was being offered on one of the shores and proceeded to the Karnataka twin (of the falls). 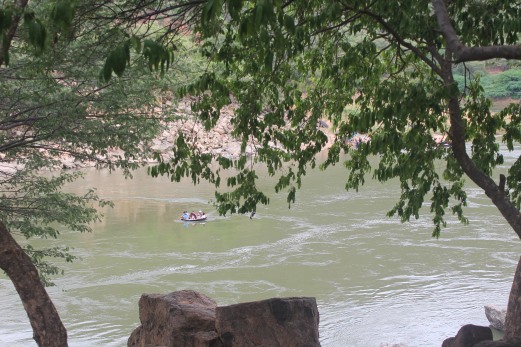 The coracle had to be transported to the other side of the island and we had to walk along. It was a nice walk through the trees. A bridge led to the landing where the falls could be seen closely. That bit was the best of all – the trees looked exotic and there were cows grazing on the little islands in the river.

We spent some time looking at the falls here – it was as if a massive hole was sucking up all the water of the river. We then started on our way back to the other side.

There were many rapids and mini-whirlpools in the water as it flowed straight into the waterfall. The boatman rowed us in and out of them until we were back at the “oil massage ghats”. It had been a fun ride. 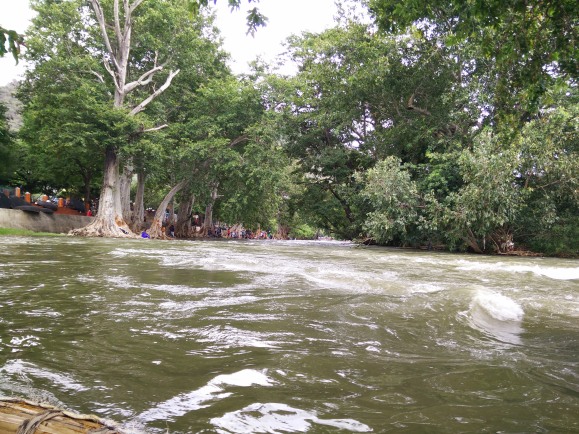 We started on our way back to Bangalore. We made a stop at Hosur to have some more dosas. It started raining heavily but the weather cleared close to Electronic City.

We were back in Bangalore at around 6.30 pm. As we still had the car for some more time, we went to play laser tag at Koramangala. That was my first time at it – it was quite a lot of fun and I felt it got over too soon. We ended the day with dinner at Jose Mess in Madiwala and got the car back to the rental place.

Overall, it was a day well spent. And the best part was that I was tired enough to have a nice long sleep on Sunday!