Last time we met, we were exploring Havelock Island and had just finished our much awaited scuba dive. This time, we’ll be going through some of the lesser known islands and wrapping up our adventure of the Andamans.

We were on our boat to Neil Island – an island quite close to Havelock. The boat ride was about an hour long and everyone used the time to catch up on some sleep. 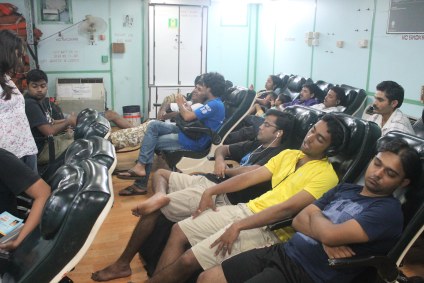 We were to stay at Hawa Bill Nest (weirdest name) which was at a walkable distance from the port.

We hired 2 taxis to explore the place and soon discovered that it was really a waste of money. The entire island could be covered on foot. The beaches were named after the Ramayana characters. We were told that we could do snorkelling in one of the beaches but as it was low tide, the sea was nowhere to be seen.

We spent some time loitering around and then decided to walk to the Sitapur beach. It was a 3-4km walk. This one was a normal beach (the one with waves). We sat there till sunset and saw the full moon rise over the horizon.

After dinner from a certain Full Moon Café (an apt name for that particular night), we walked back. We were accompanied by a huge gang of stray dogs who kept barking all the way to our hotel. The next morning, we walked to another beach which was famous for a natural bridge formation. But once again, we were foiled by the tide which was high this time around. We saw a lot of sea shells as we walked to the beach – remains of the tsunami (there was no other way the sea could have come all the way up there).

Neil island was surely a forgettable experience – an island you can definitely skip on your Andaman tour. We boarded our boat to Long Island. This was a really long journey and we really hoped that the island would be better than Neil. We played cards along the way – sitting on the floor in the bottom deck of the boat. 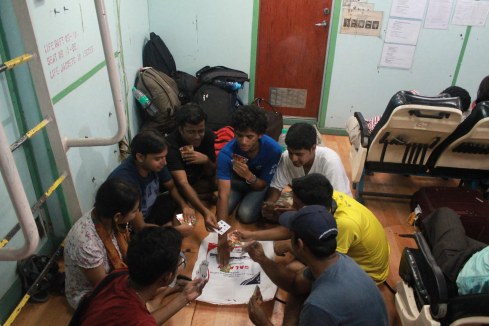 We arrived at Long Island to be greeted by a signboard which warned us of crocodiles in the water. Wow. Talk about a cheerful welcome! This island looked very pristine and unexplored. As we walked to our hotel – the Blue Planet, we passed by many old abandoned houses. The houses looked eerie – all wooden with broken windows, covered in dust and dry leaves, half-hidden in the shadows of the tall trees.

There were blue arrows all along the path which guided us to the hotel. It was a longer walk than we had expected but the place was definitely worth it.

The blue planet is run by a foreigner couple and it is a very natural setting – something straight from the books. A huge tree right in the middle of the courtyard. The floor was shaped out and smoothened with mud and cow-dung. There were tables with books in English, French and German. A hammock in one corner. A light breeze blowing. And small thatched huts all around. It was the most natural setting one could ask for and almost like a dream – reading books and lying down on a hammock under the shade of a huge tree.

The main attraction here was the Lalaji Beach which could be reached after a long and hard trek. The sun sets here at around 5 pm and it was already close to noon. If we could not return before dark, we would be stuck in the forests. So, we quickly packed some biscuits and chocolates and started on our trek. There were red arrows painted along the ground, trees and boulders to guide the way.

We passed through some villages where the ground was all dry and cracked open. The trees here were the tallest we’d seen on our trip yet. As we reached the end of the clearing, the arrow pointed right into the forest. We walked right in and kept following the arrows.

The path was not a proper trail as it was seldom walked on (with very few tourists coming to this island).

We had to make sure we didn’t miss any arrows (sometimes the boulders with the arrows were covered by leaves). At some points, we could catch a glimpse of the sea in a distance. We passed by a couple of tourists who told us to hurry on as we couldn’t risk being stuck here.

Oh and I forgot to add – you cannot expect to get mobile network in these remote parts).

Finally, the path went steeply down and we entered another clearing. We could see a few huts at the edge of it with many coconut trees as well. 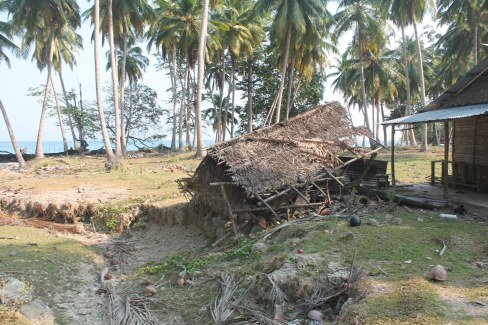 As we walked towards them, we could see that the huts were destroyed by the waves. And the sight beyond the huts was amazing. We had reached the beach. This was definitely the most picturesque beach we’d seen on our trip. It was evident that this beach was rarely frequented by people and it retained its pristine look. We jumped straight into the water and waded in. The water was as clear as ever.

The scene was so mesmerizing that we actually spent some time just lying down on the sand and taking it all in. By around 3pm, we started on our way back and reached the hotel by 5.30. And yes, it was really dark by then. It was exhausting but one the most fulfilling parts of the trip.

That day also happened to be Holi and we’d bought colours beforehand.

We played Holi outside our hotel and some of the other inmates joined us in excitement. A Holi well celebrated!

Next morning, we packed our bags and started on the really long voyage back to Port Blair. We’d travelled a lot of distance away from the main island in the last few days and it was finally time to head back. As soon as we landed in Port Blair, we rushed to catch our boat to Ross Island – the erstwhile administrative island of Andaman. The British used to head their operations from this island which was just off the coast of Port Blair. The island had old residences, churches, a water-treatment plant, a ball-room, a huge cemetery, lakes, a park among other stuff. There were deer and peacocks roaming freely on the island. It is said that when the tsunami hit this island, the animals sensed it beforehand and pulled along the people on the island to the highest parts and saved their lives. A major part of the island is occupied by the armed forces.

Oh and coolest part – most of the buildings are completely over-run by trees! 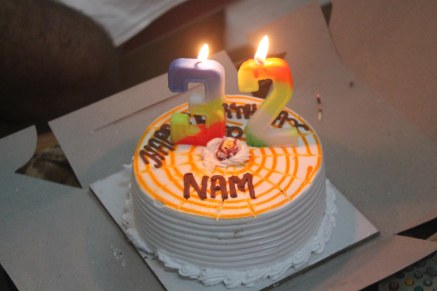 We returned to Port Blair and celebrated Nam’s birthday – surely an awesome thing to celebrate a birthday on these awesome islands!

Our trip was finally coming to a close. We returned to Port Blair and took the morning flight the next day to Chennai. We had yet another day at Chennai and this time we saw “The Lego Movie”. This was definitely one of the best trips I’d ever had in my life – it had all the ingredients to make it an awesome experience – especially an awesome set of people. Thanks everyone for make it possible! 😀 Thank you all for following me on this amazing trip! Stay tuned for more!

One thought on “Neil, Long and Ross – Part Three of “A Tale of Six Islands””